Big, bold images of people and scenes on large canvases and delicate watercolours that infuse faces full of character define the work of Joanne Hall. Joanne as a member of the Forest Hill Art Club is one you cannot forget. For decades she was a stalwart who helped to make the club a vibrant and productive space that encouraged creativity and sharing. But she did much, much more.


Today we take for granted the huge presence of the arts in Toronto, everything from TIFF and film sound stages to Mirvish Productions, dozens of mid-size and small theatres in store-fronts, to large and small art galleries and music galore. It wasn’t always this way. Toronto was still a staid city after WWII where it was difficult to find an open restaurant on a Sunday. Joanne was part of a wave of artists that crashed onto the Toronto scene to imbue the city with ground-breaking ideas and innovations that brought this conservative city to life. 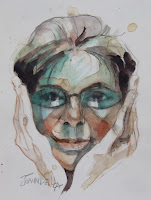 Joanne began teaching school with a focus on Art and later went on to study Archeology. Her husband Robert Hall, a technical director, introduced her to the theatre. Small theatre companies were popping up with the help of Canada Council grants and Robert’s skills as a builder and set designer were in demand. The sets, of course, had to be designed and Joanne took on this role. They produced sets for small theatres such as the Red Barn up at Lake Simcoe and the Belmont Theatre Company in Toronto but also for the National Ballet, the Canadian Opera (Carmen) and the Stratford Festival Theatre. For the Centenary of Canada in 1967 Joanne and Robert designed and produced the sets for the celebratory pageant called Sea to Sea that took place in Toronto. With television becoming mainstream in the 1950s, she also became involved in producing sets for television commercials and designing costumes.  She recalls this period as “very exciting”.

Wishing to further develop her skills, Joanne sought out Jerry Scott, a well-known artist who taught at FHAC. She found a great teacher in Jerry. She found him charismatic and challenging. In particular, she found his innovative use of colour inspiring. He taught her how to see and understand colour. And she “sopped it all up”. She went on to exhibit her work, as far as Halifax. 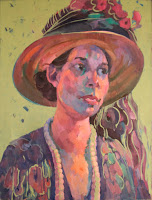 When asked how she approached her portraits she remarked that she had to “get the essence of the person”, something defining about the sitter that she had to find and then capture. Sometimes it would take two or three portraits to catch “it” and whether it was bold strokes of colour in oil or delicate watercolours, when she captured the essence she knew she had caught an insight into the person or the personality of the sitter. 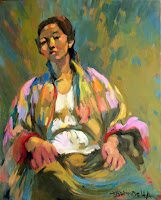 Today, despite physical challenges, Joanne has continued to delight friends and family with her renderings of their faces. She continues to inspire with her creations when the beauty and spirit of her work capture the gaze of the viewer. 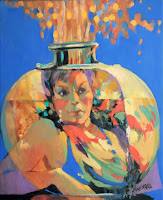 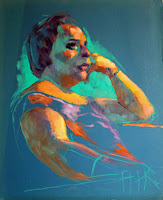 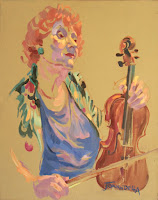 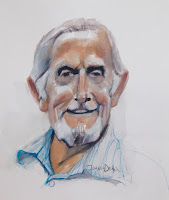 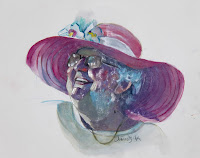 Email ThisBlogThis!Share to TwitterShare to FacebookShare to Pinterest
Labels: Artists

Forest Hill Art Club
Toronto, Ontario, Canada
The Forest Hill Art Club (FHAC) is a group of enthusiastic artists sharing a studio, enjoying camaraderie with fellow members, studio time, and participating in weekly life drawing and painting sessions working with a model. The club was established in the late 1940s near Eglinton and Spadina. Its second location is now in the Municipal Building at 666 Eglinton and is wheelchair accessible. The club caters to artists, professional, amateur, and beginners. Prominent Toronto artists of the past are Jerry Scott and Joanne Hall. ​We also offer a yearly Art Show in which members can exhibit and also sell their work. ​We share space with the Don Valley Art Club (DVAC) and have a joint schedule of courses and activities.